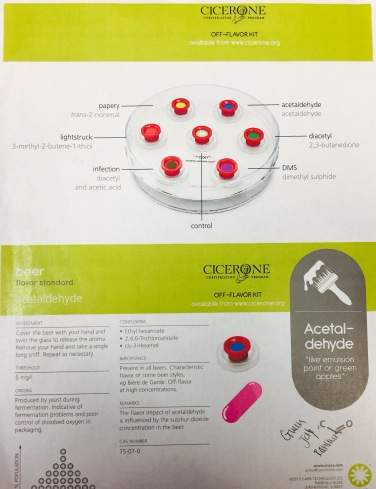 Over GABF week Meg and I both went to a Cicerone based off-flavor tasting course at Epic Brewing. The focus of the course was to compare the six most common off-flavors to a control and learn why these can happen during the brewing process. This isn’t the first off-flavor course I have taken but it was the first I have taken since I started brewing. One off-flavor sip in and I realized I would be able to use this course for the next time I brew.

As we all remember, or at least I can’t forget, the last homebrewed beer was pretty terrible. I would call it a drinkable failure. At the time I believed it to be ruined by the off-flavor diacetyl and after taking this course I am convinced that is what happened.

Each off-flavor has their causes, sometimes shared causes, but it is important to remember what you can control in your own brew setting. For me, if I am to think critically, there are a few off-flavors that I could foster in my environment.

Diacetyl: The temperature (Hello Fall) is dropping so I will be better able to control it within my home, making for happier yeast. It won’t ferment too quickly as I suspect happened in the last batch.

Papery: I need to be more aware of how much oxygen is getting into the wort and the beer as I transfer it from fermenters and bottles.

Light-struck: I brew in my kitchen and also move everything back into the kitchen when I am changing fermenters or bottling so I can be more aware of how much light I am letting in. I do let everything sit in a rarely opened closet while fermenting so it should be controlled in that place.

Side Note On Infection: This often happens when unclean equipment is used and I can safely say this should not for any reason be an off-flavor I find in my beer. As a matter of fact I need to buy more sanitizer for the next brew.

I would strongly encourage any homebrewer to take an off-flavor course near them, it doesn’t have to be Cicerone based, your homebrew will thank you.

So only one more question remains…

Should our next homebrew be a Porter or a Stout?