It was a rendezvous to remember in Salida, Colorado. There is no limit to the number of Colorado Craft Beer festivals in the summer. You can find one almost every weekend and each of them has their own vibe but there is something special going on in Salida.

It could be the location, surrounded by mountains on the Arkansas river shaded by trees old enough to tell you a story or two but that’s not it. It’s the people, the breweries, the volunteers and the beer drinkers. They took the time, their time to make the journey and everyone is there to enjoy each moment to the fullest. For those five hours, beer vacation mode is in full effect, a mini beer utopia, for one afternoon.

Somewhere between 75 to 100 breweries made the trip. You can’t try them all but you can’t be disappointed.

As with other festivals I started with breweries new to me or not in my immediate travel plans. Of course, I mixed in a few favorites along the way… looking at you Uplsope. 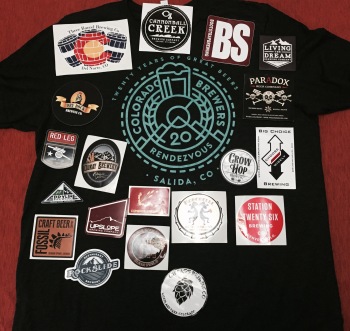 If you can afford, do it. Not for the t-shirt, not for the shaded seating and not even for the free lunch. Do it for the experience of talking to the breweries. The big breweries were out in full force but so too were the smaller ones and that first hour before the general public allowed for the serious and the causal drinker to chat with the brewers. I learned more about their breweries, process and distribution in one hour than I thought possible.

One Thing I Would Change?

Next year, I am going to bring more people and make a weekend out of it. I need to visit Eddyline, Elevation and maybe even sneak in a whitewater rafting trip down the Arkansas.