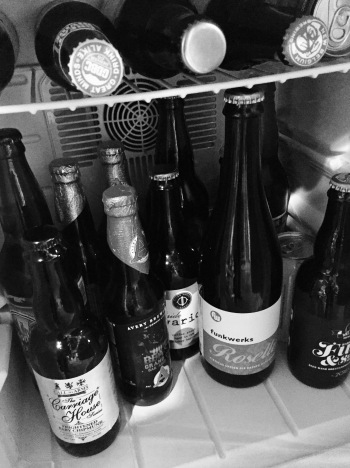 With all of the events for GABF in full swing and the seemingly limitless number of out of states beers to be had it is easy to forget about our local breweries.

We have a tendency to take them and their delicious brews for granted – not this time.

GABF week brings out all of the bottle releases in Colorado. There is no better time to stock your beer refrigerator or cellar than this week. Below are just a few of the many starting today and running through the weekend, look to see if your favorite is releasing something special. (Some of the descriptions are pulled straight from their events so you know exactly what to expect)

Monochrome is their Grisette, fermented in stainless with our house mixed-culture of Saccharomyces and Brettanomyces for 5 months. The resulting beer was dry-hopped with Motueka.

500mL bottles will be available for sale starting at 12pm. $10 each, limit 1 case per person

Chapter 3 Volume 1 and Volume 2 both feature Crooked Stave and Ransom Spirits for uniquely different barrel-aged beers. Volume 1 is a Golden Botanical Sour aged in Old Tom Gin barrels while Volume 2 is a Sour Flemish Brown aged in Rye Whiskey barrels. With under 1,000 bottles of each available from the brewery, we plan to hold a 6 bottle limit with the beers being sold first come first serve as taproom only releases.

Today is the 3rd release in the Funk&Sour series, Lucine. A fruity and tart sour blonde blended from Chardonnay barrels and 2nd turn Cabernet barrels. Buy a 375ml at either taproom

Party at the Moon Tower – decadent Imperial Porter that was aged in good ole Kentucky Bourbon barrels for 6 months with Madagascar vanilla beans.

Brandy Barrel Aged M0′ Honey Mo’ Problems – brewed this beer with as much honey as legally possible while still keeping true to our ale loving roots. Then we threw in some pear juice and let it sit in a couple of brandy barrels for 6 months.

Limited release and preview of Generation Boomerang – “We brewed this Belgian Quad back in November 2014 with the hope that it would mature into a very special, complex beer that we’d be able to release upon the world within 6 months… maybe a year? But sometimes an inordinate amount of patience is required to allow your creation to blossom to its full potential. Thankfully our willingness to avoid a barrel eviction has resulted in a wonderful, malty ale with notes of ripe fruit, red wine and just a touch of funkiness.”

Straight from their event page, certainly a can’t miss.

Brewery release was 9/30 and it’s gone out for distribution.

They conspired with their friends at Funkwerks for a two-part barrel-aged saison collaboration. River North’s version is a dark saison with syrah grape must aged in red wine barrels. The first tapping is Wednesday at Lucky Pie Lodo, followed by a full bottle release Thursday in the taproom. Bottle limits TBD