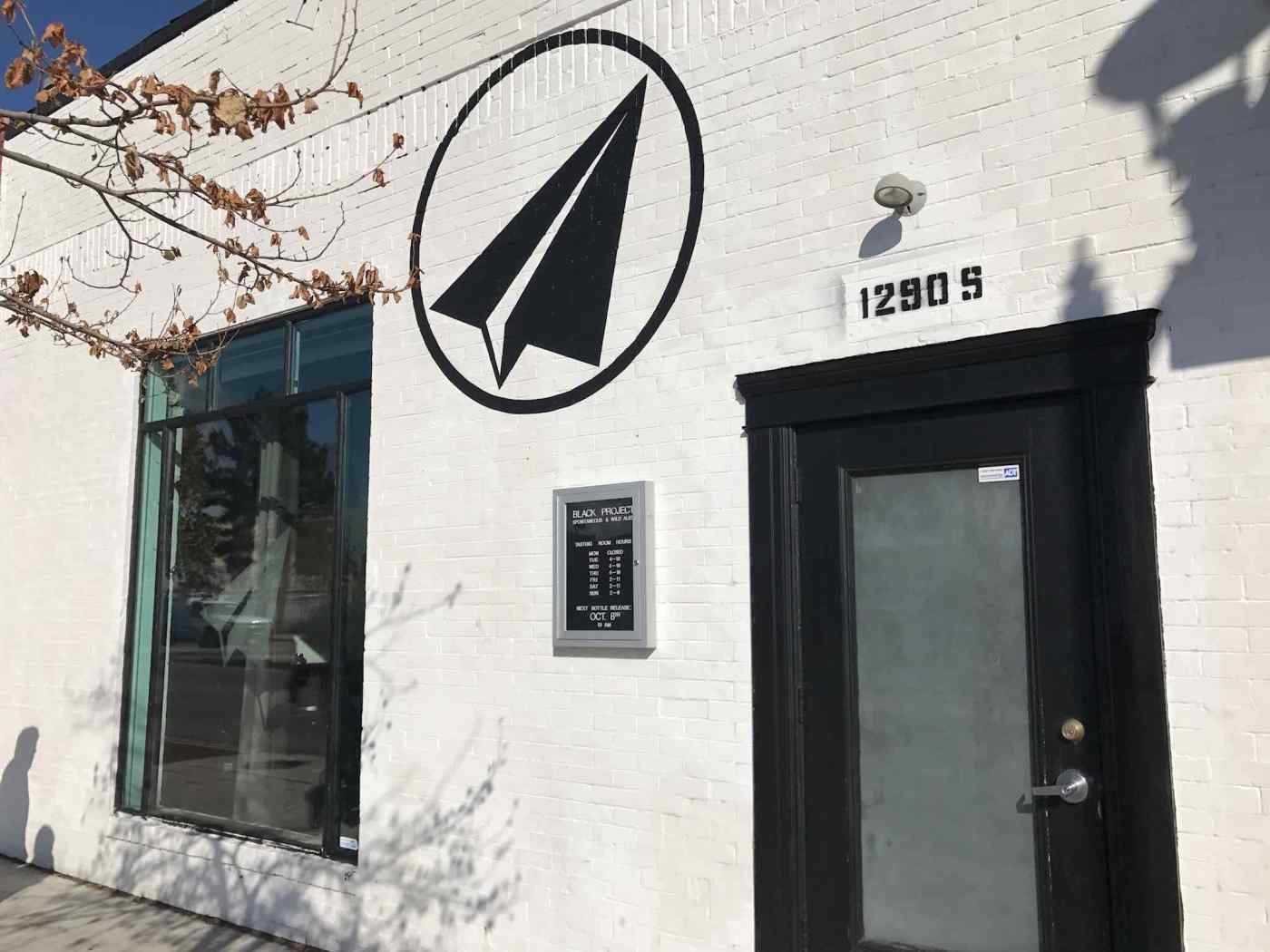 We want to start this piece by thanking the wonderful team at Black Project Spontaneous & Wild Ales for giving us the chance to talk beer and visit the new secondary facility. As a beer nerd who frequents the brewery, it was also an amazing personal experience. We don’t like to get too sentimental but it’s such an important moment for the evolution of Black Project that we can’t help but express more emotions than usual.

Okay, we are done being sappy – now it’s time to dig into what we saw, what we learned and of course what we got to drink.

We got to visit the new facility fittingly named Elsewhere with members of the Black Project team – founder, blender, brewer James Howat, and marketing manager Scott Davidson. I think we mentioned it in our opening statement but we are so stoked about it – it’s worth mentioning again. Unfortunately or fortunately, depending on how you might look at it we did not have our eyes covered and get tossed into the back of a blacked out truck – it would have made for a better story though. We are sworn to secrecy and it’s a secret we will gladly keep since it means more Black Project beer.

The most important fact about Elsewhere is that no beer is going to be brewed there – it’s strictly a storage-based facility. This is where all beers moving forward will be bottled – the bottling system is gravity fed. What does that mean? It means that Howat uses a forklift (named Clementine) which came from WeldWerks (there is always a local connection in these stories) to lift the beer up into the air to fill the system and ultimately the beers.

The beers will also be housed at Elsewhere as they condition in the bottles – OXCART and CYGNUS, for example, need four months of conditioning based on Methode Traditionnelle. SPECIAL NOTE: these beers are highly carbonated per Black Project’s instructions you need to chill them for a minimum of 24 hours. If you don’t chill them you are going to lose beer – a loss for everyone. In addition, Elsewhere houses all the extra bottles, labels, boxes – and anything else the brewery needs for this part of the process.

Elsewhere is about creating space at the original location on Broadway. Until Elsewhere joined the Black Project family in late 2017 all of these functions were happening on site – often times in between the barrels with the boxes of bottles nearly finding themselves on the taproom floor. There was too much beer being brewed and moved – a great problem to have but one that demanded a solution.

Elsewhere is strictly and specifically not open to the public – in due time, however, the public will be able to enjoy its contribution to the process.

For fans of Black Project – we can guess the question you are asking in your mind. What does this new location mean for the production and number of releases from Black Project? They are going to ramp up – there will be more releases than before – at least one per month. But and we can’t emphasize this enough – the full impact of the expansion is not going to happen immediately. More room at the original location means more barrels but a large portion of the Black Project beers are made using a three-year blend so the brewery will be limited since it takes time for new three year barrels to come online. Like all things in life – especially beer – the wait will be worth it.

Now let’s talk releases – we want to prepare you because if you are anything like us you are going to need to enhance your beer budget for this upcoming year. SUPERCRUSIE and MACH LIMIT are going to return (MACH LIMIT might be my all-time favorite Black Project Beer). In addition to CYGNUS: Cherry (Blend A and Blend B) there is another CYGNUS fruited version expected.

Also – there are going to be four variations of OXCART which are meant to be released throughout the year. You will notice the special details for these two beers (OXCART and CYGNUS) since they are the most traditional of the beers being released. These tend to be in smaller format bottles – 375ML and 500ML and will be in green bottles along with natural corks which will have the year imprinted on the side (a special touch for those who plan to cellar these beers for years to come).

One of the most hyped beer releases of 2017 will make its return in July and that’s ROSWELL. The Lambic-inspired beer will be back but any other details regarding the release of all things Black Project are being kept in-house. Don’t trust anything you might hear – disinformation is another one of the brewery’s tenets. In addition to ROSWELL – Black Project is dropping its first two pack – the fruits will reflect each other in each beer. The beers are named ALTAS and THOR – sour reds that utilize plums and black currant which during our visit were compared to ROSWELL – let the anticipation begin.

While we were talking expansion and beers we also got to sample some beers straight from the barrel. If you haven’t read any of the Black Project labels or aren’t as familiar with the brewery than you might not know that James Howat is the blender for Black Project. The beers – all of the beers are a reflection of James’ palate – would you like to guess how he keeps tracks of everything to make these decisions? We found out. He keeps a simple notepad – that’s it. And no, he would not let us take a quick look or even the blurriest of pictures and we can’t say that we blame him.

Tasting the beers from the barrel was enlightening, challenging and is something every beer lover (sour or not) should try to find a way to do. Like everything – your admiration for the final product will only grow the more you learn about the process. 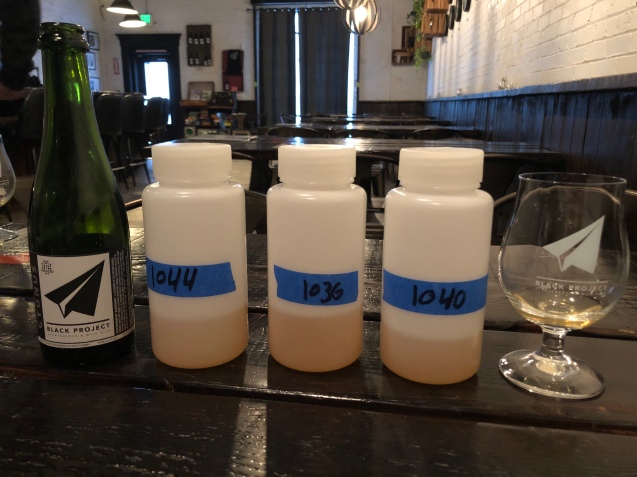 Get That Lottery Ticket

Black Project announced its expansion to signify the opening of the lottery for its latest release CYGNUS: Cherry (Blend A). This article is going live as a reminder that you only have until 10 p.m. MST today March 1, 2018, to sign up for the lottery – you can actually go straight to the lottery from this site by clicking here.

Not only did we get to taste barrels but we also got to pop the top on Blend A and compare it directly to Blend B. Both are layered and flavorful beers but they are definitively two different beers. Blend B was more cherry centered with the flavor of the beer lingering in the background. Blend A was the opposite, the cherry was present but only as a means of propping up the flavor of the beer itself. After trying both, our preference leans to Blend A – the way the light notes of cherry popped off my tongue makes me want to pop another right now – hopefully, the lottery finds its way to me.

Black Project Spontaneous & Wild Ales is a brewery rooted in tradition, focused on experimentation and deeply believes in who and what they are as a brewery. The growth is a reflection of the hard work, great beers, unique style and we at Hard 12 Brews would like to personally congratulate them. 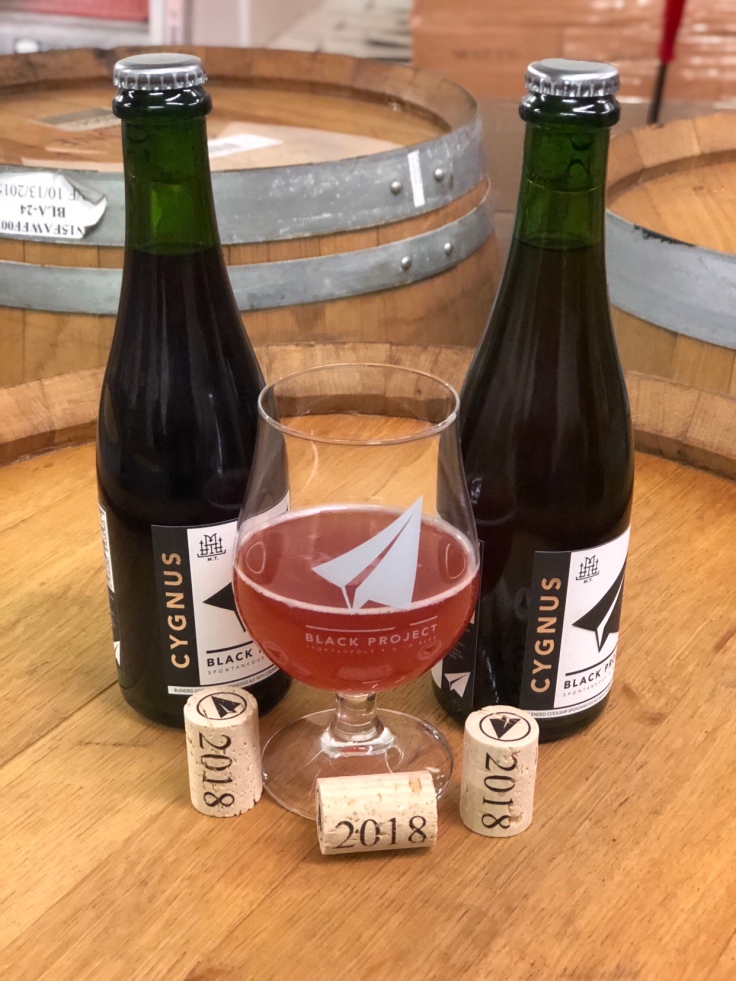 Howat spoke of the five-year plan – Denver for now at 650 barrels but 1500-2000 barrels somewhere along the Front Range in a future. It’s a future that’s sure to push boundaries, enhance craft and we couldn’t be any more excited.